May - June half term holidays opening

Gloucestershire Heritage Hub will be open as usual on Tuesday 31st May and Wednesday 1st June, but will be closed on Thursday 2nd and Friday 3rd June in line with the Platinum Jubilee Bank Holidays. 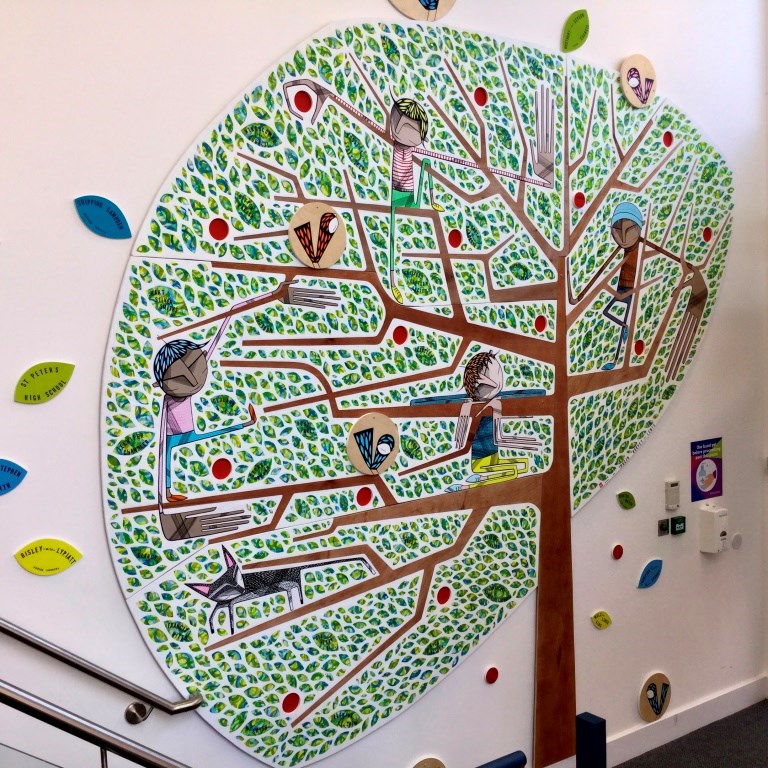 Imogen Harvey-Lewis is a freelance illustrator. Imogen was commissioned to design the entrance foyer artwork, the Donor Tree and the artwork situated in the car park, Archive Everyone Together..

Her work is heartfelt, honest and direct which translate into a strong graphic style with impeccable line work, strong composition and innate playfulness.

The tree is made up of six beech ply panels.

Each image is carefully built up in several stages. Mrs Jones the archives cat gradually appears

Some of the brushes, ink pens and paint Imogen used to create the Donor Tree

There are added birds, leaves and apples to give the tree a 3D effect.

For her research Imogen ran workshops in Gloucester and Cheltenham, met with local people through various events at the Heritage Hub and talked to partners, volunteers and staff.

Members of Sahara Sahelli group in Cheltenham participating in one of Imogen’s sessions. 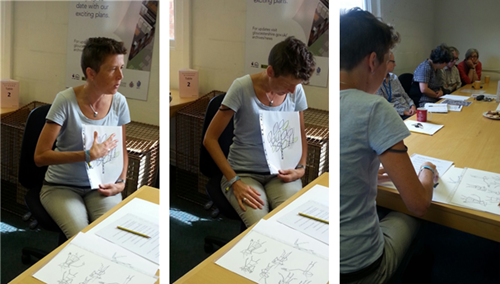 Imogen presenting her first ideas to the Friends of Gloucestershire Archives, volunteers and staff

As well as being a unique work of art the Donor Tree is also a way for Gloucestershire Archives to recognise the many organisations and individuals who helped fund the Heritage Hub facilities we enjoy today. The names of individuals and organisations who donated over £50 have their names included as part of the design. We are hugely grateful to them all.

Some of the donor’s names