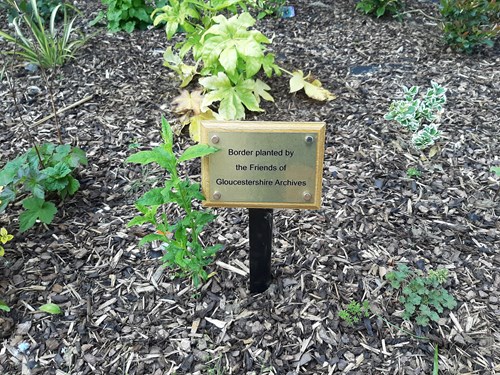 Clive Andrews, chair of the Friends of Gloucestershire Archives, writes:

In the Summer of 2014 the Friends started to raise money towards the redevelopment of Gloucestershire Archives.  Over the next few years we raised £133,000 as matched funding for a Heritage Lottery Fund grant.

As early as September 2016, thinking had extended from the building itself, its research rooms, strong rooms, meeting spaces and community facilities, to the land around it.  Exciting plans developed for a community garden at the rear of the Archives, but no one had focused on the borders flanking the entrance to the new Heritage Hub – the outside area every visitor would encounter when they arrived.  The architects originally specified areas of grass, but this was never planted and when the builders eventually vacated the site in the summer of 2019 the large borders were just barren areas of mud with an ever-increasing population of vigorous weeds.

The Friends decided that a beautifully refurbished building deserved something better.  In August 2019 we agreed to spend around £1,000 on shrubs for the borders.  The budget was limited and there was no possibility of employing a garden designer, so we turned to a firm called Garden on a Roll.  We gave the company the dimensions and they sent giant boxes full of individually numbered shrubs, together with massive rolls of biodegradable paper marked with circles to show where every shrub should be planted.

On a damp September Saturday volunteers set about clearing the weeds and digging the soil.  Once it was raked flat, the paper was rolled out and pegged to the ground.  Slits were cut so the shrubs could be planted through the paper and into the soil below.  The task was considerable as the borders were 19 meters (over 60 feet) long and mainly more than 120 cm (4 feet) deep.  The volunteers planted no less than 95 shrubs that day.  Commercial quantities of wood chippings were shovelled over the paper to improve the appearance and supress future weeds.

Planting was to some extent limited by the standard sizes produced by Garden on a Roll, and our odd-shaped borders left some spaces at the back, but two local people came to the rescue and kindly donated shrubs dug up from their own gardens to fill the gaps.

Two years on, the shrubs are well-established.  Only a couple of plants have failed while the rest have flourished.  Many visitors have already expressed their appreciation of the borders and, with the relaxation of Covid restrictions, more and more people will be coming to the Heritage Hub and will be able to appreciate the shrubs which welcome them at the entrance. 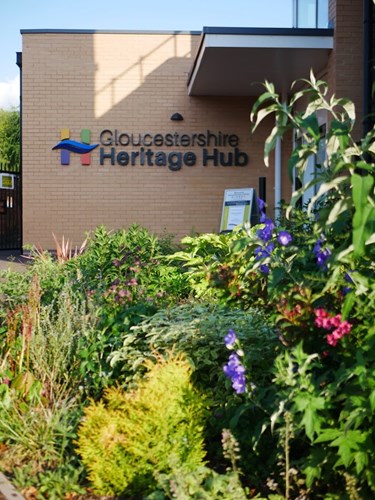 To find out more about the Friends of Gloucestershire Archives and how you can get involved, visit our website

If you would like to find out more about the plants in the “Friends” border, have  a look at the plant lists attached below: