On the second day of the Gloucester History Festival, the Heritage Hub was buzzing with activity with a garden party taking place in the newly created community garden and the opportunity to enjoy exhibitions, artwork, acting, talks and behind the scenes tours. 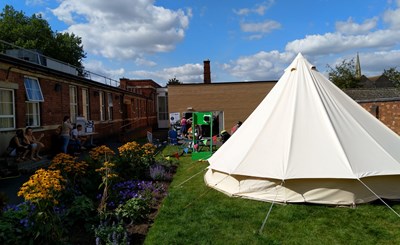 On the second day of the Gloucester History Festival, the Heritage Hub was buzzing with activity with a garden party taking place in the newly created community garden and the opportunity to enjoy exhibitions, artwork, acting, talks and behind the scenes tours.​

Inside the refurbished public searchroom and project rooms, visitors enjoyed further exhibitions on the Victoria County History, the community garden, the history of the site and the Taynton Metal Detecting Club. The latter showed the results of 40 years of collecting coins, artefacts, pottery and clay pipes in Gloucestershire.

The garden was home to Pitch Up, a camping-inspired performance which used the garden as the base for a family friendly, interactive show to drop in and out of showing the highs and lows of camping trips. Music and shouting from the Velcro Collective filled the event and a lot of fun was had! Accessible to all and audio described, it was a perfect event to be a backdrop to the day.

Also in the garden was a civil war surgeon who was on hand to heal musket wounds and pike injuries in case any were suffered during the day!

Throughout the day, tours were offered to anyone who wanted to see behind the scenes at the Heritage Hub, and two talks were offered as well – one about the Saxon Warrior of Operation Shallow Grave, a high status Saxon burial which was discovered in 2016 and excavated with the help of the MOD’s Operation Nightingale. Later in the day, a half-hour talk on “Treasures from the Archives” showed a few of the Heritage Hub staff’s favourite documents allowing visitors to get a sense of the archive holdings.

The community garden at the Heritage Hub is a new venture attempting to welcome local people and visitors to the site by having a wildlife-friendly, accessible open space that is much needed in the heart of a busy, built-up city like Gloucester. Building works had almost doubled the size of the garden and we realised that we could make it into a proper community garden rather than just using it for staff and researchers. With the increase of community groups and council training groups using the new facilities, it made sense to provide the space for the benefit of them and also anyone who fancied just popping into the garden without coming into the archives. It is still work in progress but recently a group of staff from Gloucester City Homes built us some raised beds and a fence, and planted some winter interest borders in our more informal area.

Thank you to everyone who has contributed and volunteered for the garden and the garden party!